In this post, I have released a series of prophecies God delivered to me during the latter part of 2018, after spending several months praying for America and various countries around the globe.

There are other specific prophecies regarding some of these events that I released straight to the officials of the appropriate countries.

Although this global shifting is decades in the making, there will be clear manifestations occurring in the present and near future towards its fruition.

At the beginning of 2018, I had committed myself to pray for my country, including it in my daily prayer list.
Soon after, I was instructed by God to pray for other countries, with a specific emphasis on the middle east and the African Continent.
Each month I would fast for 12 to 14 days, drinking liquids only and praying fervently, with a sizable portion of my prayer time spent interceding on behalf of the aforementioned areas of the globe.

I pray that everyone reading these prophecies are enriched and inspired toward the heavenly movement that is currently in place.

The African peoples and voices of Christianity all over the globe will rise in influence, demonstration and unity not seen before.
The white churches will give precedence to the African voices of the diaspora, as well as those of the motherland.

God wants us to pray for and watch over Muslim countries that have a sizable and/or strong Christian population within them because those nations will experience a renaissance among the believers.
God will also cause political reforms in those countries as a result of the prayers and activities of the saints in them and will cause a new realm of prosperity and political stability to take place in them.
Nations of the past and of today that have been problematic will become a light to other nations and be protectors and benefactors to those nations that God will favor.

Iran and Pakistan will be nations that house God’s glory.

Over the next few years and decades, we will see new democracies come into being. These will not be democracies after the American order, but they will be hybrid democracies. These are the times when we will see those nations that were once strong and influential, become weakened and irrelevant. These will struggle desperately to remain relevant but will fail.
Over the next few years, we will see countries tinkering with their democracies, modifying their political structures and their constitutions. Some will come about through coups and attempted coups. Some will not. Some will come about through referendums and other means. This is of me, says the Lord.

There is coming a time in which nations that were once problematic, will be nations that house God's Glory. It will not be the kind of glory that will be looked for with tainted eyes but will be the revelation of God's glory in the eyes of them who see God's ways and thoughts as higher than ours.

During the night of December 1, 2018, I had a dream. There was a demonic tail that was snatching people, millions of them, out of their countries.

In the dream, the Lord spoke to me and said, 'I am bringing about a population shift in the earth.'

I woke up and the Lord said to me, 'the devil is bringing destruction and devastation to countries' populations, but I will take him in his own craftiness and use this to bring about demographic shifts around the world.'

Over the next 10 -20 years, you will see a new face to certain countries.

There will be new political structures, different democratic structures, unlike those in the past.

For this cause, you will see new coups, revolutions, and reforms.

Countries that were not important to the global order will begin to take on the importance and be players on the global stage.

I will raise up a Christian democracy that will be an example of stability on The global stage.


New modes of communication will take center stage on the international scene. This is my doing says the Lord.

Surely the Sovereign Lord does nothing without revealing his plan to his servants the prophets.-Amos 3:7(NIV) 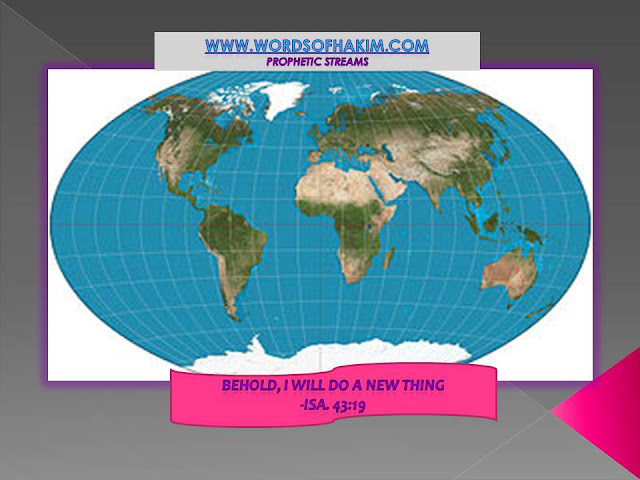 Posted by www.wordsofhakim.com at 5:11 PM No comments: